LIDISNO is the first large-scale project seeking to shed light on the relationship between language and sexuality. It investigates sexuality as a discursive and linguistically mediated formation. Normativities shape the way we use to talk and write about sexuality. At the same time, the way we use language is involved in the shaping of sexual normativities. The projects seeks to investigate these mechanisms by studying the linguistic effects of various normativity-related historical shifts: pre- vs. post-coming out; pre- vs. post-Stonewall; before and after the desire-identity shift in the conceptualisation of sexuality (late 19th c). LIDISNO uses comparative corpus linguistic methods to shed light on these issues. The aim is to obtain a better understanding of how sexual normativity surfaces in language use. The findings therefore have implications for applied linguistic contexts in which the inclusion of non-normative sexualities is a goal (such as educational contexts, institutional equality policies or non-heteronormative language guidelines).

The innovative character of LIDISNO becomes evident in several aspects:

1. It is the first large-scale language and sexuality project that focuses on normativity (rather than desire or identity) and thus moves beyond the state of the art in the field.

2. It is the first project to provide empirical linguistic evidence for historical sexuality-related shifts whose influence has merely been postulated by language and sexuality scholars but never been verified with larger datasets.

3. It advances language and sexuality studies and critical discourse studies through the development of normativity as an analytical concept.

4. It uses an innovative combination of quantitative and qualitative discourse analytic methods and unique linguistic data triangulation to study the discursive formation of sexuality and sexual normativity.

5. It possesses a novel applied linguistic, language-policy orientation, shedding light on how public language use can become less or non-discriminatory in relation to people of less or non- normative gender and sexual identifications.

1. How is language involved in sexual normativity formation?

2. How do sexuality-related normative shifts influence the way language is used to talk or write about sexuality?

3. Which consequences do the findings have for gender-/sexuality-related language policies?

Project Part 1: Language Use Before and After Coming Out

Part 1 dealt with the question how a coming out shapes the way we communicate about a person and used the public coming out of US Latino pop star Ricky Martin as a case study. It analysed language use in news reports on Ricky Martin, comparing texts published before the artist’s coming out in 2010 with texts published afterwards. The stay in Southeast Florida has enabled the researcher to gain ethnographic insights into the social context in which Ricky Martin has evolved as a major pop artist in the US. More specifically, it has given the researcher a better understanding of Latino culture as an important background to the corpus linguistic study, which keyword analyses of the two corpora when compared to each other, collocation and concordance analyses.

Results: The study showed that a public coming out is associated with discursive shifts in the way the media report on the artist (see Table 1 below for an overview). While the singer’s ethnicity was strongly foregrounded in the news reports dating from the time before the coming out, sexual identity has become the central orientation point for the news coverage after the coming out. This attests to a subtractive relationship of the two identity facets and to a shift from the discursive construction of a desire-focused Latin lover persona to a homonormative construction of Martin as a gay man whose identity revolves around domesticity and consumption rather than sexual desire. The concomitant shift from a Latino person to a person approximating the stereotypical lifestyle of white gay men renders Martin a questionable role model for Latino gay men in the US. Future research after LIDISNO will exploit the findings of this study to carry out comparisons with further case studies (other celebrities who have come out; other media types) in order to determine in how far the discursive patterns identified are of more general relevance. 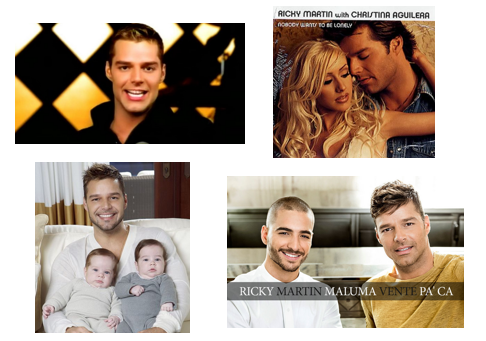 Ricky Martin: Before (top) and After Coming Out (bottom)

Project Part 2: Language Use Before and After Stonewall

The second part of the project focused on discursive shifts connected to the Stonewall Riots (1969) as a central event of LGBT liberation in the US and Western societies more generally. US gay men’s pre-Stonewall life narratives were studied using a corpus linguistic methodology (keyword, collocation, concordance analyses). A linguistic landscape analysis of the homonormative space of Wilton Drive in Wilton Manors, Florida, has given the researcher a better understanding of gay culture in the US and has advanced the theorisation of normativity within the LIDISNO project.

Results: The study has improved our understanding of how the shifts in sexual normativity associated with Stonewall have affected the way we use language to talk or write about same-sex sexualities. While same-sex sexualities were discursively constructed as pathological and/or criminal before Stonewall (even by men who experience same-sex attraction themselves), their treatment in post-Stonewall times shows a stronger connection to affirmative gay identity discourses that treat same-sex sexualities as legitimate in their own right. Identity-related discourses constitute only one of several sexuality-related conceptual domains (besides sexual practices, sexual desire, sexual relationships and the body) in the narratives before Stonewall (see Tables 3 and 4 below). The post-Stonewall narratives predominantly exhibit an identity conceptualisation and, connected to it, the notion of a sexuality-based community. The study thus attests to the central role of Stonewall, not just as a major event of gay liberation for Western societies, but also as part of a development that has promoted our conceptualisation of sexuality in terms of identities. 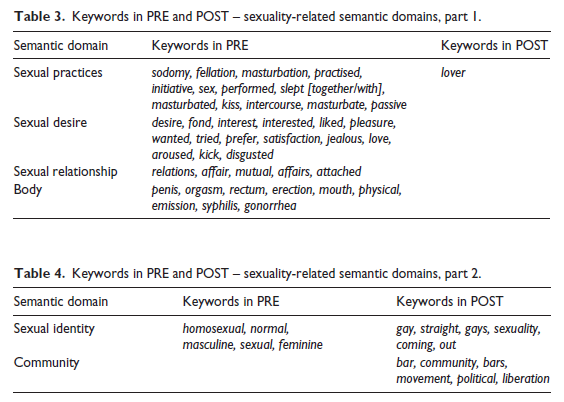 Project Part 3: Language Use Before and After the Desire-Identity Shift in the Conceptualisation of Sexuality

This part of the project used various corpus linguistic techniques to investigate texts dating from before and after 1900. This was done to find out about discursive effects of the desire-identity shift. This well-known shift in the conceptualization of sexuality has famously been claimed by Foucault in his History of Sexuality. His claim is that, before the 20th century, the societies of the Western world conceptualized sexuality mainly in terms of sexual desires and practices, that is, in terms of what people liked and performed sexually. The creation of the terms “heterosexual” and “homosexual” by the medical profession at the end of the 19th century is said to have caused a stronger orientation towards a conceptualization of people as belonging to sexually defined categories, that is, in terms of sexual identities. Hand in hand with this shift occurs a development that can be described as the normativization of sexuality, with certain identities being treated as normal, good or preferable (“heteronormativity”) and non-heterosexual identities becoming stigmatized.

The empirical documentation of the claimed shift has so far only sporadically been put forward. Language, and more specifically language use, is an excellent (if not the) medium where such a substantial conceptual shift is likely to surface. The work in this part, therefore, set out to shed initial light on the empirical verification of the desire-identity shift from a linguistic point of view. The research is still going on, but the analyses carried out so far within LIDISNO lead to the surprising finding that no linguistic evidence for such a conceptual shift can be verified in the comparison of the 19th- and 20th-century text material. This casts doubts on Foucault’s claim. While the development from desire to identity in the conceptualization of sexuality seems plausible as such (because identity is a central conceptualization of sexuality today and it was not central in the 19th century), it seems that the point in time and the domain that is said to have promoted the shift have been misrepresented in Foucault’s argument. The corpus data analyzed so far show no discursive shift at the end of the 19th century, which suggests that the shift in effect took place somewhat later. Evidence originating from part 2 of the LIDISNO project, by contrast, suggests that the shift towards identity is more strongly connected to the civil rights movements of the late 1960s and early 1970s (with Stonewall as a central event) and thus driven by the work of LGBT activists rather than the medical profession of the late 19th century. While doctors may have paved the way for an identity conceptualization in terms of sexual identity through their person-categorizing terminology, the linguistic evidence provided by LIDISNO suggests that this conceptualization was for a fairly long time restricted to medical discussion and did not enter everyday language use until much later in the late 1960s. This may have been the case because a pathologizing approach to sexual identity as practiced by early 20th-century medical professionals was insufficient to support processes of identification with sexual labels – processes that are necessary for a deeper conceptual infiltration of sexuality in terms of identity.

The data analysed in part 3 consisted of two corpora of sexuality-related prose texts dating from 1830-1899 and 1900-1969. These data were subjected to various types of corpus linguistic analysis in order to test whether a desire-identity shift can be verified in language use. The analyses carried out so far do not show evidence of such a shift. A conceptual desire-identity shift is likely to surface in a move away from verbal and verb-related constructions (they kissed; she fancies him) when writing about sexuality, towards adjectival constructions using identity labels (she is lesbian; the gay man). However, such a development cannot be verified at the word-class level. While the 19th-century data show four verb-related key part-of-speech categories and one adjectival key part-of-speech category, the 20th-century data show nine verb-related key part-of-speech categories and no adjectival key part-of-speech category. Similarly, the analysis of key semantic tags in the two sub-corpora yielded no conclusive evidence for a conceptual shift from desire to identity at the turn of the 20th century.

Motschenbacher, Heiko (2019): “Discursive shifts associated with coming out: A corpus-based study of news reports on Ricky Martin.” Journal of Sociolinguistics 23.3: 284–302.

Motschenbacher, Heiko (2020): “Coming out and normative shifts: Investigating usage patterns of “gay” and “homosexual” in a corpus of news reports on Ricky Martin.” Sociolinguistic Studies 14.1/2: 61–84.

Motschenbacher, Heiko (2020): “Language use before and after Stonewall: A corpus-based study of gay men’s pre-Stonewall narratives.” Discourse Studies 22.1: 64–86.

Post-prints and published versions of LIDISNO-related studies are available here:

LIDISNO is funded by the European Union as a Marie Curie Global Fellowship. The research within this project is carried out at Florida Atlantic University, USA, and Goethe-University Frankfurt am Main, Germany.